As mentioned in my previous post, the first version of V-HACD relies on the library Triangle to compute 2D constrained Delaunay triangulations. In fact, the V-HACD algorithm involves clipping the mesh against a plane and filling the produced holes (cf. Figure 1). 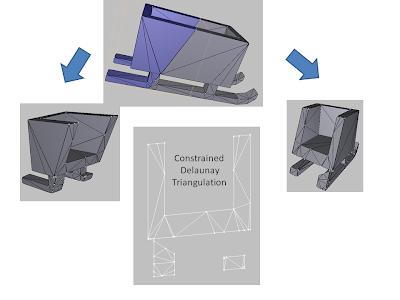 The Triangle library produces excellent results and is very stable. However, as pointed out by Erwin Coumans it has a non permissive license. Another alternative to Triangle is the poly2tri, which is released under a New BSD License. Poly2tri turned out to be non-usable in my case because it supports only simple polygons as constraints. After searching the internet for a "good" and stable implementation with a permissive license, I ended up developing a simple triangulation algorithm (it is not a Constrained Delaunay Triangulation), which is enough for V-HACD needs. My implementation is a very simplified version of the Incremental Delaunay algorithm

The new triangulation algorithm was uploaded to the git repository and could be compared to the Triangle library by adding #define USE_TRIANGLE to vhacdMesh.cpp

The code is still ugly and not optimized at all. For now, I am trying to have some first results and understand better the algorithm limitations. Hopefully, I'll have soon the time to clean up the code.
Posted by kmamou at 18:56 No comments:

Lately, I have found time to work on improving the HACD algorithm. The new V-HACD library tries to tackle the problem of convex-hulls inter-penetration usually encountered when using HACD. Figure 1 illustrates this limitation by comparing V-HACD results to those generated by using HACD. 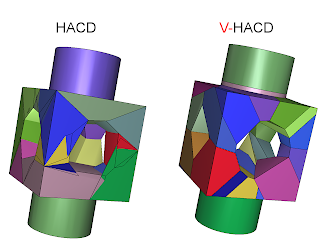 V-HACD works only with manifold closed meshes of arbitrary genus, which makes it less general than HACD algorithm (which handles open and non-manifold meshes). The V-HACD code  is available under New BSD License. However, the current version relies on the following other libraries:


The first results are encouraging. However, the code is still buggy and not optimized. I hope that people would be interested in helping me improve this first version.

To play with the algorithm, a pre-compiled win32 executable is available here
Pre-computed decomposition results are available here

To apply V-HACD to the input mesh "input.off" use the following command line:

Below, some screen-shots of the obtained results. 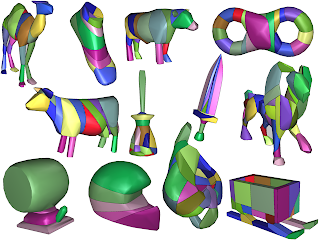 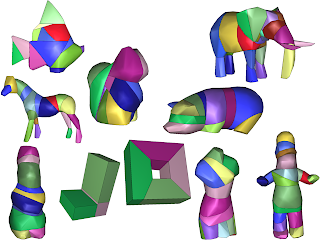 The current version of V-HACD provides poor results or errors for the following three meshes. As soon as I get some free time I'll try to fix these bugs. 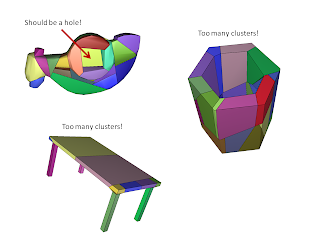